JACK GRELLE - GOT DRESSED UP TO BE LET DOWN
​ 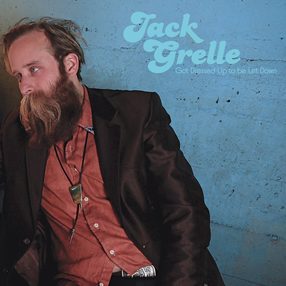 This is St. Louis based Jack Grelle's third album and if the other two are of this quality I'm amazed I have never heard of him before. On the strength of this album he strikes me as being a much more countrified version of a young John Prine with the similarly raw edge to his voice and the tremendous songwriting that sets him a little above most of his peers.
Whilst he comes up with some tremendous melodies most of his songs are driven by an incredibly strong and poetic lyricism, telling some quite riveting stories in the process, much like most people's description of Prine. I keep thinking about those similarities every time I listen to this recording but really those similarities are only apparent because they both have the slightly raw weather beaten vocal style, (Jack's are a little more melodic), but the quality of the songwriting is right up there with the likes of Prine. Don't rely too heavily on that comparison though because, like Prine, Jack Grelle is a unique artist driven by his own musical vision rather than some old hacks descriptive struggles!
He certainly had a crack team of musicians helping him out on this album in the form of Pokey LaFarge's band, The South City Three and John Horton of the Bottle Rockets with pedal steel, piano, fiddle and harmonica compliments of other artists from 'Big Muddy Records.'
Some of his songs tell stories of someone who is in the process of losing his love, right through to someone who has completely lost it and has no real hope. There is a murder tale and even one emotion tugging tale of the life and death of his late Grandmother; in a nutshell he writes about whatever appeals to him with all of the variety of emotions those stories entail.
In writing about individual songs I should say straight off that the highlight for me of this album of highlights has to be Birthday cards, an incredibly affectionate tribute to the life of his grandmother. The lovely accordion and gentle guitar get things going on this tremendous story song that has the feel of something a young John Prine would have come up with, both qualitatively and in terms of his vocal texture, although perhaps Jack is not quite as raw! It is an incredibly powerful story that is actually enhanced by the instrumentation and whilst entirely different in just about every way works in a similar emotionally reflective way to Prines Sam Stone. The album's title song, Got dressed up to be let down, is a song that has a 'hillbilly' feel despite the drums and steel guitar, on a catchy melodic mid tempo song that again tells an excellent story. As the song progresses the harmonica joins in and as the sound solidifies it can be visualized as being played in a honky tonk of the 1950s, even including some strong Cajun texture at times. Hilltop of sand includes a both excellent and raw vocal on a song that stylistically has more of a Marty Robbins feel. There is a lovely melodic acoustic guitar and mandolin and some gorgeous female harmonies on another excellent song that brings a different perspective to modern country music and to this album that has so many diverse textures. Not takin' after me is a lovely gentle, almost mournful song with steel guitar, female harmonies and twangy electric guitars alongside the bass and percussion as he writes to his brother trying to steer him clear of his own mistakes. There is a gently chiming guitar and weeping steel guitar with a little percussion and bass supporting Jacks evocative vocal on These walls a beautifully written and performed tale of a love and indeed a life that has gone a little stale over time.
This tremendous collection of ten songs has no linking concept, being more a selection of realistic story songs, all under the very broad umbrella of country music, but a country music that is raw and completely lacking in anything extraneous or any kind of sanitization, exactly what real country music should be. That lack of superficiality is often what stops artists being adopted by the 'mainstream' but sooner or later one of the artists whose music I love will get the success they so richly deserve. On the strength of this excellent recording Jack Grelle could, perhaps even should, be that artist!