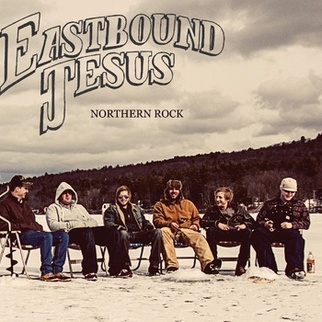 
This unusual album blends alt. country, bluegrass, country, country rock, even a little rock into a musical stew so good that I’m struggling to find the superlatives with which to describe it’s excellence!
Whilst they are stylistically different I find that I keep comparing them to the mighty Good Luck Thrift Store  Outfit. Certainly there are elements that have similarities, as there are with most generically similar bands,  but I think what does it is the fact that the lead vocals are, as with
the two Thrift Store lead vocalists, perfect for this great music. The tone and texture of those vocals just couldn’t be improved on. Most, but not all, lead vocals are handled by Adam Brockway who also plays guitar, with the other five
members of this tremendous band being Carl Anderson on drums and vocals, Luke Anderson, banjo and vocals, Dave Wright plays bass and vocals, Dylan Robinson is on lead guitar as well as some vocals  and finally Zack Infante plays lap steel, guitar and vocals.
The songs are all band originals and when I emailed them to get more information, Carl responded promptly by telling me that sometimes Adam Brockway will turn up at band practice with an idea or most of a song and they all get together to finish and arrange it for the band. Other times someone comes up with a riff and again
they all join in and gradually build a song. As he pointed out there is no set routine for writing, every song arrives in a different way, in fact the sublime North Country Girl took about ten months before they were all satisfied. Pretty obviously they must be very good friends with all six having their own, probably at times differing opinions, and it seems they all have to be happy with the finished song before recording commences. Many talented bands have fallen apart over lesser matters, but it is a measure of this band’s attitude as well as talent that the songs are all exceptional. One of the things that gives them the edge over most of their peers is the fact that they not only have a mastery of those already mentioned generic country offshoots, but in many cases individual songs actually have a little of each style spread across it, blending the whole album into a unique and quite original style.
This recording gets under way with Out Yonder a lovely slow moody start with nice acoustic guitar, banjo and steel with excellent lead vocal and matchless harmonies that have a nice little edginess to them. This is followed by 54 Miles, an excellent funky chugging song slightly reminiscent, at least in structure, of J.J. Cale, with an  addictively repetitious heavy bass line and an atmosphere made more evocative by the inclusion of the banjo. In fact, in many ways the banjo contributes greatly to their signature sound. Even on songs that veer towards more of a rock background it is often included, something that not only brings a little more  variety but also helps to bind the
diverse elements together. Sitting By The River is a tremendous song that blends an easy going country rock feel
with bluegrass, something that may seem odd to anyone reading this but listen to the song and you will, like me, be hooked by how catchy and atmospheric it is. The already mentioned North Country Girl is an epic song in as much as it covers several tempos and a variety of moods, and includes banjo and many of the already mentioned roots music elements. They are all blended to form a song that is as near perfect as you could wish for, ultimately providing an accurate sumnation of what this band is about as well as providing a near perfect evocative
atmosphere. That is followed by another real epic in Where the winter goes, a song that veers from alt. country to bluegrass with a nod to punk, rock and ‘hillbilly.’ I kid you not, but it is held together brilliantly, this time with Carl Anderson’s excellent lead vocals, great harmonies and their varied instrumentation. Final mention goes to My
Old Pickup Truck, a tale that contains another really nice blend of instrumentation on this mid tempo edgy country story. As with every song on this tremendous album something that should give the band immense appeal is their
seemingly effortless ability to imbue every song, no matter how ‘mellow’ with an edginess that is difficult to define, but it is there none the less and should ensure the band will be treated as something special by all who hear them.
Regardless of the content of the songs or stylistic proclivities the whole album is melody driven, which when you add the skillfully written lyrics and tremendous lead and harmony vocals, really should be sufficient for any
listener, but this band are not content to coast along on that, often successfully challenging themselves to use the instrumentation in subtle but slightly different ways, giving their sound it’s uniqueness. This is only their second full album but it certainly builds on the quality of their excellent debut, ‘Holy Smokes.’ The follow up to debut albums can so often be a real disappointment but not so in the case of Eastbound Jesus. I’ll be more than
happy to keep playing this terrific album (and their debut!) until such time as their third is released without ever tiring of what I’m listening to. An album that teeters on the edge of greatness!