ADRIAN + MEREDITH - MORE THAN A LITTLE
​ 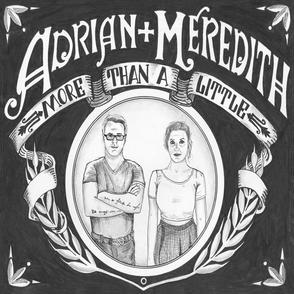 I read  that the now married couple, Adrian and Meredith Krygowski come to music from opposite directions; he from punk and rock, playing acoustic guitar in 'claw hammer banjo' style, she from playing fiddle and clogging in 'old time' traditional music. Maybe it's splitting hairs but it seems to me the basis of those styles is pretty much the same, just maybe rooted in different eras! Punk is and always has been an entertaining but often uncomfortable music genre and in many ways so is old time music with 'atmosphere' and drive taking precedence over perfect production and smoothed out playing and vocals.
Anyway, whatever the idiosyncrasies, this is a tremendous album that takes rock, punk, old time, folk and adds 'country,' a hard driving raw gypsy jazziness that on occasions has a Balkans flavour, as well as a taste of Waitsian originality. Make no mistake, this is an album that has so much originality that even after multiple plays I'm still finding it fresh and even innovative despite the fact that the album will only find a home with any comfort at all in the broad ranging catchall of 'roots music.' However trying to slot it into a sub genre will be problematic and will test even the most fanatical P.R labellers!
A measure of the high regard in which this pairing are held is emphasized by the fact that Paul Niehaus on steel guitar, (of Lambchop and many, many more) has worked regularly with Adrian for about five years, with two of the guests on this recording being the great JD Wilkes of the Legendary Shack Shakers and Fats Kaplin of Jack White's touring band and again, many others. Whilst Adrian and Meredith have made their home in Nashville, and there are strong country elements in their songs, don't get the idea that this is the usual 'country pop' so beloved of the mainstream. In fact, it could very well be that this album at least matches the rawness of many of the old time originators of 'hillbilly' music, something that the above named JD Wilkes should feel comfortably at home with. The full band lineup is Adrian on vocals and guitars, Meredith, vocals, fiddle and 'clogging,' Paul Niehaus on guitars and pedal steel, John Wood, drums, Ken Perkerwicz, pedal steel and electric guitars, Diego Vasquez on trombone and Paul Thacker, trumpet. It may look a slightly odd instrument line up but is less so than you might think, giving this multi talented band a completely unique originality that blends disparate elements, as well as well suited elements, beautifully. They actually describe themselves as a Gypsy, Punk, Folk band, although there is much more to their music than even that wide ranging description suggests and there is certainly a powerful dose of 'country' included as well as that old 'hillbilly' sensibility!
We get off to a chugging start on Take a boat, with a variety of instruments creating an almost vaudevillian feel and with Adrians evocative vocal joined by Meredith's harmonies. It is a song that includes fiddle and electric guitars, even including a little twanginess, as well as percussion and thudding bass, often creating a bluesy yet 'carnival' feel! Very difficult to imagine I know, so you'll just have to buy a copy and lose yourself in the incredible musical atmosphere. On the title track More than a little there is a hillbillyesque fiddle, with steel guitar, powerful percussion sound and throbbing bass supporting Adrian's raw vocal on a strong song that creates a dark atmosphere without even considering the lyrics! Eventually a trombone comes in and adds to the strangeness of the song, latterly joined by the trumpet. It is not 'weird,' just very unusual and fairly obviously, unique, although the instrumentation does on occasions come across as being a little overwhelming but within the context of this song it helps increase the dynamism. Greasy coat and kitchen girl is propelled by a powerful percussion and gypsy violin which combine to get things off to a speedy start, soon joined by Adrian's evocative vocal on a song that is a powerful rural tale on which Adrian and Meredith exchange verses. It is a song that could easily come from a 'hillbilly holler' of old or a gypsy encampment such is the dynamism of the playing and the incredible atmosphere that is created on a song that is much more sparse than many of the other tales on this album. Finally, on Country tune, as befits the title, we are taken into a musical world that has an almost straight 'country' feel, with the fiddle and steel guitar supported by acoustic guitar and the usual percussion and bass.  It is probably because the fiddle and steel share the lead that it has such a strong country leaning, with Adrian's excellent lead vocal and Meredith's harmonies doing nothing to diminish the country elements.
This is a difficult album to really sum up because there is so much going on, both musically and stylistically. Whilst the styles are varied the songs all have aspects of their neighbours, ensuring there is a lovely flow to this tremendous eleven song recording. The end result is that the unique and highly original mix of styles, albeit interlinked, is what actually defines the music of this hugely talented band. I don't know how many times I've listened to this recording but honestly it is still revealing new depths and aspects that I missed on previous listening sessions. This is definitely another addition to my albums of the year list and I suspect that will apply to the lists of most other people who hear this tremendous recording.