ANDY FERRELL - AT HOME AND IN NASHVILLE
​ 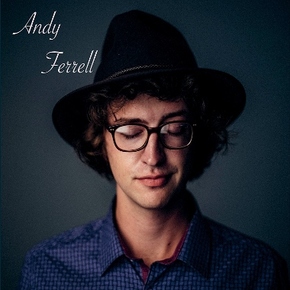 This is an unusual recording that is perfectly depicted by the albums title, with the first six songs being full band recordings made in the studio in Nashville’s Quad Studios and the other six being a live gig at The Jones House in Boone, North Carolina, Andy Ferrell's birth place and still home town deep in the heart of the Blue Ridge Mountains.
Whilst none of his songs are out and out comedy the listener will get the impression that a certain lightness of mood is never far away simply because of Andy's enthusiasm and the way he projects these high quality tales.
His vocal style has warmth and a nice open unselfconscious feel that draws the listener into the worlds that his incredibly powerful poetic lyricism creates. It's difficult to really compare him to anyone else although I read somewhere that his songwriting has the 'bittersweet edge' of artists such as the late great Townes Van Zandt and even Hank Williams. Heady heights certainly and only time will tell, but even on the strength of this debut recording I can see why that comparison was used. He has an open, totally natural, in many ways 'loose limbed,' style that brings to mind the originality of some of the greats such as Guy Clark but lets see where he is after three or four albums. Having said that, it is certainly exciting when you discover a talented new artist and Andy certainly has huge promise and a talent that on the strength of this debut recording is already coming in to bloom.
It's an interesting experiment to make one half of an album studio based and the other half live, something that has been done in the past with limited success, but in this instance it certainly works, letting the listener know that he is comfortable and relaxed as well as hugely talented in either setting. The only thing I can say against it is that the studio recordings all sound complete, with the warmth of the other instruments such as bass, percussion, steel guitar, banjo and dobro etc enhancing his voice and the lyrics whereas in the live setting with just voice and guitar I get the impression that these are stripped down versions of songs. Not lesser versions, but different and I suppose having heard the studio tracks first I find myself wondering what the live ones would sound like in the same setting. Nit picking I know, and I am really enjoying both aspects of the album pretty much equally. Lets say it's more an observation than a complaint! I've yet to find out who the studio musicians are but it goes without saying they are an incredibly talented bunch who show admirable support on each song, avoiding any hint of histrionics, just beautiful tasteful playing.
Album opener Last Dime Blues gets things going with a nice sawing fiddle intro accompanied by guitar, percussion and bass with Andy's vocal dominant on a song that has a strong element of not so much comedy, but a lightness of touch, with excellent female harmonies that bring a little contrast to a tale that has a just as strong old hillbilly feel, albeit updated! Another New Year's Eve is a gorgeous little snippet from life that starts with a lovely gentle acoustic guitar, bass, piano, dobro and accordion providing the backdrop to a highly descriptive ballad with nice harmonies supporting Andy's evocative vocal. Although it could be given a 'country' label the accordion adds a nice cajun feel. Next up is Photographs and Letters, supported by a lovely chiming steel guitar and piano on a slow but strong ballad with gorgeous female harmonies that contrast beautifully with the bulk of the arrangement, with Andy's vocal almost at talking pace on another beautifully descriptive tale. There is even a mid tempo upbeat 'country and western' song in Nobody to answer to, with fiddle, steel guitar, chunky bass and percussion and some excellent lead and harmony vocals. High Water, Low Bridge signals the start of the live section, played out in front of a small but enthusiastic audience, with just Andy's confident vocal and acoustic guitar on a song that has a lovely lightness of touch mainly due to his presentation of the song than the lyrical content. Run Billy Run has some nice full guitar playing on a tremendous tale of Billy the Kid that can be added to the considerable list of classic 'outlaw' tales. Andy's strong character laden vocal gives a perfect evocation of the tale.
This is certainly not an album that can be put simply in the singer songwriter category, although to a degree that is what it is, but Andy Ferrell is much more than just that loose catchall. 'Country' is probably how he will be promoted and justifiably so, but his country music has a strong thread of 'old timey' even a little bluesiness with elements of old folk music giving him a strong individuality and huge promise for what should be a great musical future.