MATT PATERSHUK - I WAS SO FOND OF YOU
​ 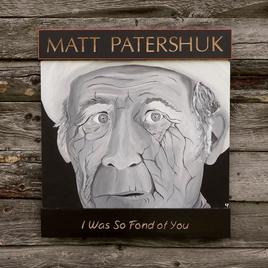 This is only the second full length album that Canadian country singer songwriter Matt Patershuk has released and yet the recording has the feel and warm atmosphere of an artist who has been around for decades! Maybe it's because many of the songs are reminiscent of the 'country and western' music of five or six decades ago but with a natural modern day 'alt.' edge in production, arrangement and musicality that avoids any of the sugary sweetness that many of the recordings back then were guilty of. Matt's deep vocal style has a naturalness that must be the envy of singers who have to resort to affectations to get their story across, sometimes tender, at others ominously threatening but always natural.
It is an album that blends some funereal paced songs with a deep melodicism and perfect for purpose arrangements into a quite addictive stew, it's mellow sound not detracting in the slightest from it's musical power and depth. I suppose what seperates it from other work that is stylistically similar is the honesty and integrity of every song, in a similar way to the work of an artist such as Guy Clark, with no unnecessary acoutrements in the often sparse arrangements.
The album was produced by Steve Dawson and Mike Bub with Gary Craig on drums and Fats Kaplin playing fiddle, banjo and accordion and adding her gorgeous character laded backing vocals to the mix was Ana Egge. Whilst Ana's harmonies, that often extend to duets, are added to most of the mellow softly toned songs, this is far from being a 'countrypolitan' album. With it's often raw tales of heartbreak the recording is given an  edginess that, however mellow the music, avoids any signs of mawkishness
The raw swampy bluesy country of Back Against The Wall is a hell of a way to start an album particularly when it is as lyrically dark and haunting as this tremendous song. When it is propelled by a raw yet melodic vocal style you can be forgiven for thinking it surely has to be all downhill after this incredible start that is reminiscent of Tony Joe White at his very best, with some tremendous slide guitar and fiddle work for good measure!  It is followed by Prettiest Ones, proof that things have not gone down hill but that the huge quality has actually been maintained. There is still an element of rawness to Matt's evocative vocals but they are softened by Ana Egge's beautiful feminine harmonies, occasioinal mandolin and weeping steel guitar on a gorgeous slow moody ballad. Harviestown is a powerful tale with Ana's gorgeous harmonies on a tale that is stylistically reminiscent of the 1950s story songs of murder that dominated the country and western charts. The lovely mandolin adds a haunting edge of loneliness whilst Matt's vocal performance is in best storytelling mode. Little Guitar is a gorgeous aching lovelorn ballad with sparse instrumentation, again with Ana's lovely harmonies on the chorus adding to the keening fiddle and melodic guitar. The slow sparseness does nothing to detract from the songs power instead blending beautifully with the depth of Matt's voice perhaps creating an echo of Guy Clark. Finally, Pep, the Cat Murdering Dog is a tremendous, if easy rolling, murder ballad with a difference. It's a song that bores its way into the memory with classic weeping steel guitar for good measure, with the bass thud and light percussion laying a foundation that never detracts from the story line and the lovely sound of a mandolin jumping in and out, adding a little light to the lyrical darkness.
The reflective nature of most of these songs that look back at happenings rather than forward to what might happen is probably what helps to give the album it's relaxed feel, despite the often harrowing nature of some of the lyrics. There are echoes of so many other people in Matt Patershuk's  music and yet he doesn't actually sound like anyone else! That in itself puts him in a very good position, with his tremendous songwriting abilities, deep and sometimes raw but manipulative vocal style and the perfect arrangements, added to which is the fact that his songs are at least within hailing distance of the mainstream but with a complete lack of saccharine!