DANIEL MEADE - WHEN WAS THE LAST TIME 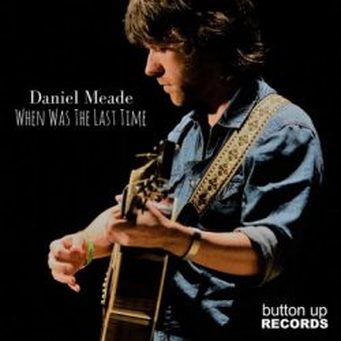 This new album from Daniel is something of a departure from his recent recordings, most of which had their deep tap root in 'country music' and its myriad offshoots. Having said that it now strikes me that being a native of Glasgow, 'American roots' music is in his blood and is consequently still in evidence on this album despite its more stylistically ambiguous direction. It shouldn't really be a surprise that 'roots' music is 'in his blood;' after all many of the American migrants who birthed country music had either travelled from Scotland or had their roots there, as well as well as various other British or mainland European locations.
The change of style on these nine high quality songs was not on a mere whim either. Whilst the songs may contain plenty of darkness there are glimpses of light and large doses of optimism but what really provides the contrasts and balances the songs are the always beautiful, catchy melodies and Daniels warm evocative vocal style. To explain where these tremendous songs came from it is probably better to use Daniels own words:
"Each song on 'When was the last time' began life as a letter written to, for and from myself in an isolated moment. I'd read somewhere that this is a considered way of coping or making sense of the darker days in life so, having suffered from prolonged spells of anxiety and depression since sobriety kicked in, I was all for trying."
I'm certainly not going to try to unravel or explain these deeply personal songs; that is best left to the individual listener but don't be put off by the anxiety and depression expressed by his words above. Most of us go through those feelings as we plough ever onwards through this life and for many it is a never ending struggle. Some of Daniels struggles are obvious from the lyrics but don't think this is a depressing album. Even on the songs in which the lyrics give clear depictions of where Daniel was at the time of writing, the melodies are so atmospheric that they will have the reverse effect on the listener to what he was suffering at the time and actually lift the mood.
With the exception of the drums, which were played by Ross McFarlane of 'Texas,' Daniel played and sung everything on the recording. Unlike his 'band' albums this recording has a big, powerful and full sound that whilst taking his music in a different direction to his 'country roots' songs will still be, thanks to the clarity and warmth of his vocals recognizable, to anyone who has ever heard him live or on record, as a Daniel Meade recording. I think what gives the album its extra power is the fact that the songs are a development from deeply personal 'self help' letters that Daniel wrote to himself rather than what would have come out if he had simply sat down to 'write some songs.' It must be incredibly rare for someone to have released an album with so many personal images and yet if you remove the power of the lyrics this is still a tremendous album that includes varied tempos and incredibly original ideas. Listen to So much for sorrow and Don't we all to hear songs with similar productions but entirely different musical perspectives. Add some of the mid tempo songs that pretty much 'rock' and I'm sure listeners will be hugely impressed by the subtle variations that are revealed in this diverse album.
Hopefully the message this recording intimates is accurate and Daniels 'demons' are slowly retreating. As he will know they are always ready to attack any weak link so 'resting on laurels' is sadly never an option but perhaps that is, at least in part, what makes Daniel Meade one of the best 'singer songwriters' around. He should be even more proud of this recording than all of its tremendous predecessors and the discerning music buying public should get out and buy the album and hear a master songwriter opening up and revealing much of himself (and perhaps in some cases themselves) in these songs. As someone who has suffered with depression for many years it was easy to empathize with the sentiments and situational allusions that whilst personal to Daniel will be recognizable by all too many. If an album with deep lyrics is not your thing, fear not, this album contains more 'musicality' than just about anything else you are likely to hear this year!