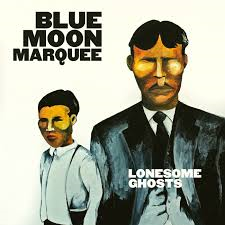 This is an album that really should appeal to fans of both blues and jazz alike, with its roots equally in the two genres that in the distant past were pretty much regional variations of the same music. The nine tracks clock in at just under half an hour but this recording is such a pleasurable listening experience that repeat playing is no hardship as you listen to, despite the raw vocals, the eneveloping warmth of the almost reassuring and beautifully realized arrangements.

Blue Moon Marquee are a duo consisting of A.W. Cardinal on lead vocals, guitar, and harmonica and Jasmine Colette on harmony vocals, bass, and drums. A.W is an incredible guitarist with a lovely warm fluid style whilst Colette plays stand up bass, at the same time playing kick drum with one foot, a snare and high hat with the other, as well as adding lovely harmony vocals, the end result being that they have as full a sound as many four piece bands. All of the expertly written and hugely evocative songs come from the pen of A.W. except for Moon Mulligan’s Pipeliner Blues and his vocals are beautifully expressive on every song with a nice raw style that sits in a similar territory to a young Tom Waits although with more warmth but no less expressive.

On the tracks that are in more of a standard blues format, (although nothing on this album is really ‘standard!’) the music and tempos almost have the feel of a modern day Willie Dixon at his most laid back, something that can also be applied, up to a point, to the songs that lean nearer to jazz, with the raw gravelly vocals providing an essential contrast. Allied to this is a funky Dr. John feel but much more sparse and less complicated ensuring in many ways that this album should be more accessible and easier to listen to.

What I Wouldn’t Do could almost be from the Willie Dixon songbook with it’s lovely dominant rolling bass, piano and melodic guitar sound and the raw bluesy vocal that lies somewhere between Long John Baldry and a young Tom Waits! Trouble’s Calling has a nice easy going jazzy feel with melodic guitar and piano and excellent thudding bass on song that is easilly pictured being played late night in a jazz/blues club. It really is a terrific song that with each successive play becomes even more appealing with it’s feel of a modern day John The Revelator. Bishop Street is a lovely mellow bluesy ballad with Colette’s harmonies providing a nice contrast on a song further enhanced by A.Ws beautiful warm guitar solo. As with most songs on this exceptional album there is an easy going feel but at the same time a powerful tension as befits the very best jazz or blues recordings.

‘Lonesome Ghosts’ is an album that I just can’t seem to stop playing ensuring it has rapidly become challenging to fit in sessions of listening to other albums around it. I suspect that it may even eventually reach the giddy heights (at least in my world) of Donald Fagens ‘The Nightfly’ an album from a different corner of the same field and one that even after all these years I often return to. There is such a rolling easy going grandeur that it genuinely becomes addictive  thanks to the beautifully blended yet sparse instrumentation and A.Ws raw but evocative vocal style. Add the foundation that is laid by Colette and you have a recording that will probably be played for a very, very long time in my house.