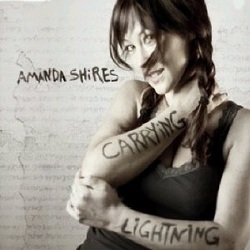 This is only the second solo album released by Amanda, although she has quite a musical pedigree, having worked with artists such as the Texas Playboys, Thrift Store Cowboys, Jason Isbell and Rod Picott. It’s hardly surprising when
you hear her beautiful vocals and incredible mastery of the violin and the fact that she hails from Lubbock in Texas, home to Butch Hancock, Jimmie Dale Gilmore and Joe Ely, to name just a few, further strengthens that list of pedigree musicians on the outside of the mainstream.
She is helped out on this album by several tremendous singer songwriters in their own right; Rod Picott who produced the album and played electric and acoustic guitars, Neal Casal, guitars and harmony vocals and Will Kimbrough on electric guitar, with Chris Scruggs adding some quite beautiful steel guitar throughout. Amanda’s gorgeous violin sound is quite dominant on most of the songs and helps to give a slightly different, but appealing, perspective to these songs that vary from a folksy country feel through to a strong traditional sound. The instrumentation is varied and never has the feel of being over done,
in fact at times having a really open atmospheric sparseness from which the thoughtful, well put together lyrics benefit. All except one song were written by Amanda, the exception being Barbara Keith’s beautiful Detroit or Buffalo which Amanda virtually makes her own with this rendition.
Some of the songs have an almost ethereal, haunting feel to them as befits a set of stories that are in the main about love, although sadly,
predominately of lost love and the loneliness and extreme emotions that follow that loss. Amanda seems to have found a way in not too many words of really describing those emotions and when you add the atmospherically haunting, at times sparse, instrumentation you are left with an album of rare beauty and even, on Kudzu a little optimism, it
being a tale of a deep love. The lost love songs are played at various tempos from slow and haunting as in the case of Love be a birdand the gorgeous When you need a train it never comes, to the strangely perky mandolin on the mid tempo Lovesick I remain, so maybe she is beginning to feel that things could be worse! Ghost bird is more of a mid tempo
country rocker that includes her beautifully haunting violin as befits the songs theme, with She let go of her kite having a similar tempo on a song that could quite easily be a metaphor for the fragility of life and love.
This is an album that whilst not overtly ‘country’, certainly has strong folksy country elements that combined make it an incredibly fresh and rewarding listen.