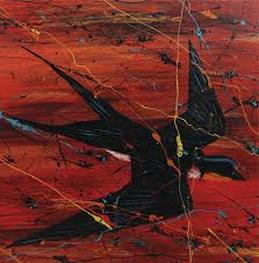 
There is a timelessness to Charlie Parr’s music that many continually try to affect but very few actually achieve. Charlie manages it without reverting to any of those false affectations, with everything about his music whether live or recorded being totally natural. It must be  incredibly difficult to make a sparse, acoustic folk album into a listening experience that can be repeated over and over again but Charlie, thanks to his virtuosic guitar/banjo playing, the modulating of his vocals and his tremendous writing manages it every time.
I think that what gives him that believability is that his music is not ‘blues’ in the modern sense of the word. What he writes and plays harks back to the days before any real promotion of roots musical genres actually took effect in any real sense, there being no or certainly minimal separation between the music played by the white ‘Hillbillies’ or the African Americans. Often the poor white people were in no different a predicament to the poor black people, in fact there are many cases of early and mid twentieth century white ‘country’musicians being taught their ‘chops’ by old black musicians, Hank Williams being one that comes to mind. Charlie is often simplistically referred to as a blues musician but there is far more to his music than a word that is as generically limiting as that. You only need listen to the songs on this tremendous album to hear that whilst everything blends seamlessly into a sound that is uniquely recognizable as Charlie, most songs could just as easily be termed ‘hillbilly’ as blues and this is what contributes to Charlie’s individuality and sets him above most others that play in a similar style. Because of that blend ‘folk musician’ would probably be far more appropriate, but in many ways just as limiting.
The Minnesota area that Charlie comes from has always been a hot bed of roots music and it seems now that the musical community spirit is still powerfully in existence with many of the musicians still playing together and helping each other out. Local percussionist Mikkel Beckman who is also a member of ‘Corpse Reviver’ another local band who sit very much under the influence of Harry Smith’s Anthology of American Folk Music, also contributing washboard, fridge parts, foot stomps and thumb piano to this album, very much enhancing the ‘old timey’ do it yourself feel. Charlie, fairly obviously handles lead vocals, guitar and banjo with Dave Hundreiser playing harmonica, jaw harp and guitar, with Charlie’s wife Emily adding a little femininity to proceedings with her
harmony vocals on several of the songs.
This ten song album is bookended by two traditional songs, Jimmy Bell and Rattlesnake, both songs to which Charlie brings something new thanks to his not recognizing any boundaries between ancient songs and his own originals. It’s all just music to him! The other eight songs are all written by Charlie and again emphasise  his songwriting abilities that never seem to lose their edge. In fact some of the songs on this album, that is often dark and eerie, are as good as anything he has ever written. Album opener Jimmy Bell, a song that Charlie dedicates to the late Dave ‘Snaker’ Ray, is driven by the lovely chiming resonator guitar and harmonica on this traditional tale that emphasizes Charlies ability with his raw  heartfelt vocals as well as guitar and how to keep a classic rural blues
interesting. The same applies to the other trad song, Rattlesnake, this being a tribute to the still very active ‘Spider’ John Koerner. For the uninitiated the two men mentioned were two thirds of ‘Koerner, Ray & Glover’ a dominant band at the time of the early 1960s folk/blues ‘revival’ and also residents of Minnesota. On Nowhere …. Fast Dave Hundreiser provides excellent harmonica support on a speedier blues song with Charlie’s evocative vocals and resonator guitar to the fore. Charlie’ s keening vocals driven by the banjo and jaw harp ensures My Wife Left me is a genuine evocation of the atmosphere created by some of the old blues/ hillbilly  greats of seven or eight decades ago with it’s lonesome repetitive beat. As with several of the other songs on the album the pervading atmosphere is often quite sinister and dark. On Motorcycle Blues the hard driving harmonica and resonator guitar drive Charlie’s impassioned vocals, along with Mikkel Beckmans percussion, on another atmospheric tale. Final mention goes to Jesus Is A Hobo a slow moody song with just Charlies guitar and occasional harmonica supporting his story telling vocal with Emily providing lovely atmospheric harmonies on this haunting tale.
As far as I’m concerned every album Charlie has ever made is essential listening and he must be one of
the most consistenly excellent performers around with this being another tremendous album of 21st century old time rural folk music by a man who has that music oozing out of every pore! Long may he continue.