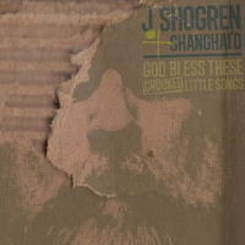 
This is the fourth and arguably best album so far released by
J Shogren although his previous offerings were of a pretty much equal quality, it’s just that this one seems to have a fuller and more individual sound. It is another album that will be difficult to promote because there is not really a particular category that covers this tremendously inventive music. Shogren and his excellent band blend blues, country, old timey, a little jazz, vaudeville and even ballads and folk into a brand of roots music that is pretty much unique. There was a time when singer / songwriter’would have just about covered him, but  not any more.

Shogren wrote all thirteen of the stylistically diverse songs, takes most lead vocals plus guitar, mandolin, lap  steel and one string miner’s banjo. Mandy Bohlender is on back up vocals although this term does her a disservice because it’s her lovely voice on harmonies and some of the verses that serve as a counterpoint to Shogren’s gravelly vocals and gives the album even more character and appeal. Aaron Edge is also on vocals and guitar, Ansel Foxely on resonator, Jascha Herdt,  drums and guitar, Shaun Kelley on bass and cello, Mark Lyford plays  euphonium, Bill McKay, mandolin, accordion and fretless banjo with David Romtvedt on accordion and muted trumpet. They seem to be a really tight band, as they would need to be with the varied, but far from overdone all acoustic instrumentation and the constantly changing tempo’s and styles that bring a large amount of diversity to this album of mainly dark songs.
Shogren himself is an academic who splits his life between Centennial, Wyoming and Stockholm, Sweden so it should come as no surprise that this much travelled man’s music is stylistically all over the place, but thanks to sheer writing and musical ability  all of the disparate elements on this excellent album blend perfectly into a fully
formed musical experience. Album opener Holding Tank includes the lovely sound of a resonator guitar on a strong bluesy song with Shogrens gravelly vocals blending with the lovely feminine vocals of Mandy Bohlender. The following song Boney Lemon Davis has a nice percussive start with Shogrens vocals, again with lovely harmonies from Mandy, on the powerful story of a trapped miner, somehow made even more powerful and memorable by the incredibly catchy chorus. A Long Line has an addictive foot tapping banjo start then in comes Shogrens vocals, with excellent harmonies on the chorus, eventually segueing into what has the feel of a hoedown song. It is at times almost hillbillyish but much more developed, in many ways a mini epic thanks to the style and tempo changes within the song. This is immediately followed by Broken Every Vow, a powerful tale propelled by excellent brushed drums and strong bass that starts with just banjo, with the lovely chiming mandolin soon joining in and providing
the lead throughout a story on which the subject  is seeking redemption for his sins, but it’s too late! Dark, but with the instrumentation perfectly selected. Thief River Falls River Thief has a nice acoustic guitar introduction with a
chirpy mandolin lead, giving this dark murder ballad, in which the wife of a wolf hunter kills him and defies anyone to find the body, a deceptively light feel despite the sinister stortyline! Finally, Stumble is a powerful hard driving tale of the struggles and determination of an itinerant in the 1930s, with excellent resonator guitar and an almost gospel chorus.
J Shogren’s albums always have depth and quality to them but I can’t help but feel that he has moved up a notch thanks to the diversity and the ability to experiment that he has access to with this tremendous band of musicians, with the icing on the cake being the emotional breadth provided by the contrast between his and Mandy Bohlender’s vocals. I suspect that this excellent and rewarding recording will not be picked up by the mainstream, but the world of music would be a poorer place were it not for hugely talented people such as J Shogren and his band pushing, and in some cases breaking, the boundaries in roots music. Long may they continue to do so.