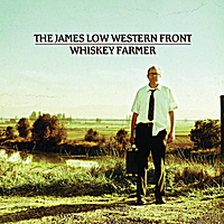 This is a slightly unusual album in that it has enough edginess for it to be accepted by fans of alternative country but could also do well in the mainstream given a chance. This is the fourth album released by James Low, although the previous three were under just his name and this is his first since 2008s excellent ‘The Blackguard’s Waltz.’ The Portland, Oregon based band was put together in 2010 and consists of James Low himself on lead vocals, guitars and songwriting, Tim Huggins, bass and vocals, Dave Camp, guitar and vocals with Joe Mengis on drums. This excellent album is produced by multi instrumentalist Mike Coykendall of the late and much lamented (certainly by me) 1990s band The Old Joe Clarks and producer of a variety of artists from the edgier side of country/folk.
There are some gorgeous guitar sounds including steel guitar on this album of only eight songs, that consist of some really tuneful, melodic, low key country rock with Low’s pleasantly expressive vocals and songs dominating proceedings. There is a lovely open sound that evokes the wide open spaces and farmlands allowing the excellent vocals, the just as good harmonies and the instrumentation to breathe. It is an album that works as a concept, relating not only to the life of the Whiskey farmer, but to anyone that struggles, sometimes unsuccessfully, against the tide of expectations and tradition piled on them by history. It clocks in at less than half an hour but covers a broad spectrum of emotions, although it has been mooted that a longer version of the album was or is in the pipeline, and yet there is never a feeling on this album, of quite poignant songs, of being short changed.
The album kicks off with the simply gorgeous title track Whiskey Farmer, a song about the harshness and hardships of farming life, with it’s beautiful steel guitar and quite sparse sound, added to the subtle harmonies making it a difficult song to emulate, much less top! As with most of the songs on this tremendous album it could just as easily run concurrently as a metaphor for, in this case, someone who feels he should be able to achieve his aims and ideals, but knows he can’t. Thinking California and Words actually do seem to match it in quality with the former being a gorgeous, if slightly unsettling, haunting ballad about restlessness and the latter with it’s beautiful steel guitar enhancing a lovely ballad about the realization that a lost love is probably for the best; ‘use your tongue, your surgeons knife’ meaning that he is probably better off without her!
Ultimately an album of lovely, predominately mellow, melodic sounds belied by the fact that the songs themselves are at times darkly realistic and even thought provoking. Terrific album!