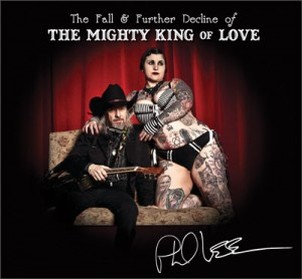 
Phil lee has worked in and around the music industry on and off for close to five decades but has only had a recording
career that goes back to the start of this century. He is known as a country rocker but that is far too limiting a definition for a man who has most definitely ploughed his own furrow for so long, picking up myriad influences and experiences along the way and whilst there is a lot of country in his music he really should be in a sub genre on his own. He fairly obviously takes his music seriously but the same cannot be applied to himself, with many of his songs having a comedic element, in some ways like a heavier version of Kinky Friedman and a vocal style not dissimilar to Peter Case.
As far as I’m aware this is his fourth studio album and as with his 2009 offering‘So long, it’s been good to know you,’ the support he has on this recording is a veritable who’s who of the edgier side of country music. It is
again produced by much sought after guitarist songwriter and of course producer Richard Bennett, with Ken Coomer (Uncle Tupelo, Wilco) on drums, multi instrumentalist George Bradfute and Dave Roe, another man who has played with just about everyone, on bass so the esteem in which Lee is held throughout the music industry is fairly obvious. Phil Lee himself takes all lead vocals, plays guitar and harmonica and wrote all of the songs although, I Hated To See You Go was co written by Barry Goldberg and All You Need was in conjunction with Duane Jarvis.
He certainly doesn’t beat around the bush with his excellent song writing that includes absolutely no metaphorical allusion, just straight forward down to earth honest sentiments. It is these powerful sentiments that makes some of the songs so remorsefully sad that it’s impossible to get away from the question of was he serious or was his tongue firmly planted in his cheek. I suspect it was probably a little of the former and a lot of the latter! Despite this, there is plenty of room on the album for some tremendous songs that don’t include a humourous element and there are quite a few of these.
Album opener I hated To See You Go has a gospel choir on the chorus on what on the face of it is, a mellow weepy lost love song, or it would be were it not for the fact that he is celebrating her leaving him and is planning an exciting future! Although, as with many Phil Lee songs, not everything is always as it seems. Is he really glad she’s gone or is he just trying to put on a brave face? A highly literate mélange of sentiments! Cold Ground is a really good twangy lost love song about a lover who has died. It is incredibly sad but there is always the nagging question of ‘is his tongue in his cheek,’ if you suspect the answer is ‘yes’ I couldn’t disagree. Because it is such a good song it would be a shame if it was just looked upon as a send up but again, I suspect it will be. One of these songs that is too sad to be taken very seriously although again, lovely sentiments. Every Time is a really good sparse song with very good harmonica and resonator guitar joined by banjo and washboard with some nice twang and a vocal that I
can’t believe is not Peter Case, on a song about no longer loving someone, and how! All You Need is a really good twangy pleading country song, beautifully played and sung with real feeling from the point of view of a man who falls for a girl, although she having been hurt before won’t commit. The tale of The Hobo’s Girl is an excellent highly descriptive story of the hobo who really wishes he could settle down with his girl but can’t seem to manage it, another song that benefits from the lack of a humourous element.
This is an album that always keeps the listener slightly off balance wondering how much of it is intended as a send up and how much is genuinely heartfelt but the quality of the music and the songwriting shines brightly throughout, although it does feel as if the shiny surface of a disc is just too polished to restrain an artist such as Phil Lee, after all, he is/was the Mighty King of Love and long may he reign!