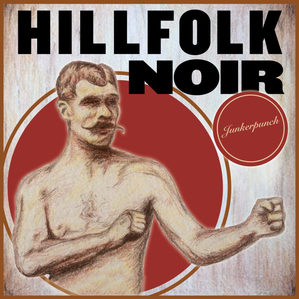 In all this is the fifth of Hillfolk Noir's albums that I have reviewed on this website, plus I've made a point of seeing them each time they've visited Brighton, making it true to say that their quirky, highly individual music makes them one of my favourite bands. With 'favourites' we all ask ourselves with each new release if this is going to be up to their usual standard and it's really gratifying to say that to my ears this could be Hillfolk Noirs best album yet! In all, this is their eighth recording, although included in that figure is an excellent solo album from band leader Travis Ward. Having mentioned one of their number this is a good time to tell you the trio consists of multi instrumentalist Travis Ward on most lead vocals and guitars, his wife Alison on musical saw, washboard, banjo and vocals, with Mike Waite on double bass.
More and more of late it seems to me that the musical saw has become a bigger contributor to their signature sound than perhaps it once was. It's not actually their most used instrument; it's probably highlighted because it strikes me that they use it more than any other band I can think of and the sparseness of the instrumentation on this recording seems to bring it more to the fore. Of course you have to add the fact that Alison is a gifted player who is able to create such an incredibly haunting, eerie atmosphere with that most practical of all 'instruments.' Mike Waite's bass playing is responsible for laying the foundations from which Travis and Alison are able to express their pretty much unique blend of instrumentation and their edgy, often combined vocals, that when put together recreate something akin to the atmosphere and rawness of the 'hillbillies' of old.
Of the generous seventeen songs on this recording eleven were written by Travis and the remainder by artists of the quality of Henry Thomas, Skip James and Tampa Red, although it doesn't really matter who the writer is this trio put their own unique stamp on every composition! For some time now they have referred to their own music as 'Junkerdash' and whilst I wouldn't presume to argue with their own definition I often tell people that the band name is a pretty good description of their tremendous music! They have always been able to tap into the rural earthiness of the early 'hillbillies' whilst adding a 'noirish' and often edgy eeriness that ensures they cannot be mistaken for anyone else.
This tremendous recording kicks off with Dead Maud, a Travis original that is driven by guitar, banjo, washboard, bass and Alison's incredibly manipulative and ghostly musical saw, whilst the pair combine their edgy vocals on this tremendous duet that has a percussively dynamic feel. The banjo, washboard and musical saw along with the thudding bass drive Alone, sitting on a bench, a song on which Travis takes most of the lead vocals with Alison joining in at times. It is another song that has a spooky haunting atmosphere on this incredibly sad Travis original that evokes the harshness of the rural life of the old timers. An excellent guitar lead is soon joined by percussion and a Travis lead vocal on Billy got popped, with Alison on harmonies on a slightly threatening rural tale that has an otherworldly atmosphere that almost evokes that spooky old movie, 'Deliverance.' The atmospheric banjo gets Might as well live like a hobo started, soon joined by washboard and Jews harp on a powerful song that has a deep dark atmosphere despite a lightness to the lyrics, with the combination of the instrumentation creating an incredibly catchy effect. The bass, washboard, Jews harp and banjo drive River on fire a song that has a powerful hillbilly edge, with Travis on lead vocal and Alison coming in on chorus on another song that has a strong otherworldly haunting atmosphere that creates the impression of musicians who have just come down from the high Appalachians of a hundred years ago to perform.
Looking back over previous reviews, Hillfolk Noir have exhibited an uncanny consistency of quality in their recordings as they plough their highly individual musical furrow. Their sheer musical quality prohibits them from resting on their laurels and helps push them forward with the quality of performance and songwriting allied to further experimentation and development, albeit within the admittedly narrow confines of old timey music. That is, narrow confines in most hands, but certainly not in theirs; not all the time they have a songwriter of the quality of Travis and a trio who are so finely attuned musically. They have a huge depth of feeling for 'traditional' music but are completely unafraid of putting a modern slant on an old musical genre that many believe died in the 1930s, never to be resurrected! How wrong they are?  Whilst 'old timey' or 'hillbilly' seemed to die out, or at least be relegated to 'folk music' status around the 1930s with the development of 'western swing,' country and western' and the many other generic labels in country music, the thread was always there for artists to keep this often 'eerie' traditional music going. With the advent of the internet and home computers it has become easier for artists to develop their own strand of traditional music, knowing the large record company money men were never going to get involved, putting the onus on the artists to record this rural music that was actually the foundation without which modern day country music would not exist. The end result is a huge bonus for 'real country music' fans, with Hillfolk Noir being at the apex of an ever growing list of quality modern 'hillbilly' bands.