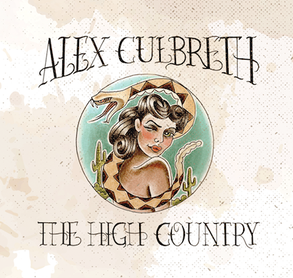 This is the third full length album that Alex Culbreth has been involved in, but his first as a solo artist. The previous two were with The Parlor Soldiers, a trio he formed with Karen Jonas and Dan Dutton who released 'When the dust settles' in 2011 and then Alex Culbreth and the Dead Country Stars released the excellent 'Heart in a Mason Jar' at the tail end of 2012. Perhaps it was those two varied recordings that helped Alex to find his own natural style, but he has certainly achieved it on this tremendous album that is a mix of country, folk and blues, often all on the same song, even including on one occasion a song that evokes 1950s Rock 'n' roll.
Whilst Alex is an incredibly versatile vocalist, with his abilities enabling him to range from mellow tenderness to a raw hard driving fieriness, he is also a talented songwriter who wrote all eleven of the songs on this album. As with his vocal abilities his writing allows him to have a totally natural perspective on the aforementioned genres to such a degree that he could probably work exclusively in any one of those styles, but it's to the listeners advantage that he continues to make recordings as diverse as this tremendous album. Whilst there is that diversity of styles there is a lovely flow to the album with none of the stop start feeling you often get when an artist blends styles. On 'The High Country' he was helped out by other musicians with fiddle, bass and pedal steel but played all guitar and percussion parts himself. There is a sparse feel that allows Alex's evocative vocals and lyrics plenty of breathing space even on the songs that include a little more instrumentation such as fiddle and steel guitar.
It is difficult to pick particular highlights from a recording from which everything is worthy of mention but I've picked a few that will hopefully show off the talents of this gifted musician. The first track on the album is the excellent Corn Liquor which gets underway with an acoustic guitar intro, soon joined by a sawing fiddle, harmonica and Alex's slightly raw yet melodic vocal on an excellent song that in many ways evokes the old hillbillies whilst still retaining a strong modern originality, with the thudding percussion adding more edgy depth to the song. Stagnant Waters is a tremendous a cappela (apart from some basic percussion) 'gospel' song on which the power and emotion of his vocal is to the fore and with a really deep bluesy atmosphere. The straining rawness of the vocal performance gives the song an authentic old 'hell fire preacher' scarily sinister feel. The deep darkness is followed by PBR, Whiskey and Pot, an excellent country song that starts with a nice acoustic guitar, and light percussion before being joined by an atmospheric fiddle and Alex's evocative vocal, with intervention from a weeping steel guitar on an excellent song that has an appealingly loose,'loping' tempo. Tear It Up is, as the title suggests, is a speedy 'Rock and roll' song, with acoustic guitar and percussion, that in many ways evokes the mid to late 1950s early days of rock with Alex's rasping vocal performance straining to attain an ever deeper rawness, something he succeeds in doing perfectly! Choke That Chicken is a speedy choppy tale that contrasts with most songs on an already diverse album. This one projects an old hillbilly hoedown atmosphere with the sawing fiddle, with occasional harmonica and percussion adding to the tale and with Alex's vocal at its raw best.
The songs are all beautifully written and arranged and as with all of the very best roots albums, there is a powerful edginess to everything Alex touches, giving the album a raw believability rather than a softening of any edges. His songwriting and arrangements give each song, regardless of style or tempo, an atmosphere that in many cases summons the authenticity of the 'old timers' who first recorded in this variety of loose generic fields whilst still retaining an appealing modernity. In fact, 'loose' goes some way to summing up this recording but it is a looseness than can only attain any believability or quality if the instigator is comfortable in the styles and highly skilled. To say Alex Culbreth fits into both those categories is a huge understatement!