COUNTRY LIPS - TILL THE DAYLIGHT COMES
​ 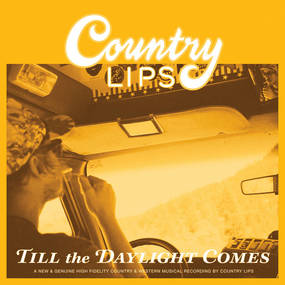 'Country of multi coloured hues' is a description that comes to mind when trying to describe this eight piece country bands music. This is not straight country and although there is some 'hard country' in their makeup they seem to have a slightly different perspective to most other country bands.  This recording has plenty of variety but is defined by an almost impossible to describe uniqueness, in fact at times there is even a detectable psychedelic flavour that may well be the thing that I'm trying to get at! Whilst there is usually an upbeat feel, the listener will always get the impression they are using a lot of restraint, not surprising in view of their reputation for putting on storming live shows!
This is their third studio album and their fourth overall if you include a live recording from 2015, which followed on from 2014s 'Nothing to my name' and 2012s debut 'Touched' all of them readily available on the www.  The band consists of Austin Jacobsen who plays bass, Trevor Pendras, electric guitar and vocals, Miles Burnett, drums and vocals, Hamilton Boyce is also on electric guitar and vocals, Alex Leake, acoustic guitar and vocals, Jonah Byrne, fiddle, Kenny Aramaki, keyboards and Gus Clark on accordion and mandolin. All of the songs were written by the Country Lips except for Please Be My Love which was by Carl Sauceman and Monroe Fields, the song having been made famous by George Jones and Melba Montgomery.
At times in their music there are occasional echoes of the Everly Brothers alongside 1960s psychedelic garage bands, as well as the Flying Burrito Brothers but none of those comparisons really bears too much scrutiny. They are simply vague impressions of a band who ultimately have their own unique sound that even has echoes of the 1950s and 60s but without too much sanitization! Some of the vocals, particularly the harmonies, create a strange otherworldly atmosphere, something that affects the whole album and ultimately gives the band their unique edge. Perhaps 'otherworldly' is going a little too far and it is a sound that is certainly country music, but country music that can't really be tied to the mainstream or any sub genre or offshoot that is solidly recognizable.
The album begins with Laundromat, with its chugging guitar intro a la the Tennessee Three but there the similarity ends on this upbeat mid tempo duet that has some tremendous harmonising from the two singers. Not quite the Everly Brothers sound but still pretty good and the Everlys would have loved to have released a song so full of life and pleasure. Only here long enough to leave is a gorgeous, slow moody ballad underpinned by thudding bass and percussion but including the beautiful steel guitar and mandolin on a song that is reminiscent of something Gram Parsons might have done in one of his reflective moods. There is the sound of a lovely accordion on Day in the sun, an incredibly catchy song that has an excellent lead vocal, for much of the time supported by more tremendous harmonies on a tale that includes a variety of vocal inflections, again with a chugging upbeat and varied instrumentation. It is immediately followed by Friday's my Friday a song that has a slight edge of 1960s psychedelia; nothing too overt, there is still a strong country feel, but the image of a 60s garage band discovering psychedelia is an impression that floats in and out of a fascinating song. Strong harmonies open Don't quit your day man and keep going throughout with guitar, accordion, bass, choppy fiddle and percussion for company on a really strong song that beautifully blends a modern day country feeling with the country rock of the 1960s. Twangy guitar, piano and steel guitar get Grizzly bear billboard a classic mid tempo country ballad underway, with an excellent lead vocal and the usual high quality harmonies on a descriptive tale on a subject most of us have some familiarity with!
Whilst the songs in themselves are excellent lyrically they also have plenty of addictive, memorable melodies and what strikes me as being an often unusual production that tends to make the songs timeless. Not necessarily in terms of the lasting impression of the album, but more in the out of time feel that means the recording could as easily have been made in the middle of the twentieth century as now. Ultimately they are songs that could easily be turned into straight or hard country but with so much invention in this band they have created an album that is different, memorable and hugely entertaining