THOMAS HINE - SOME NOTION OR NOVELTY
​ 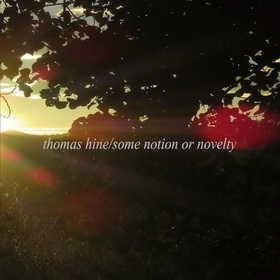 This is the warm voiced Colorado native Thomas Hine's third album to come to my attention and will probably be commonly filed under 'Americana.' His songs certainly contain elements of both folk and country albeit with a unique melancholy that many aspire to but few manage to create as beautifully as Thomas has on this often restrained but powerful recording.
This is an album that I would definitely say is a 'grower' in fact almost defining that word as it slowly but surely draws the listener into an often pensive world, but a world that also includes an occasional comforting warmth in it's mellow sounds but lyrically dramatic intensity. The songs are in the main slow and wistful but in most cases the depth of the lyrics are a rude awakening from the almost intense melodicism. In some ways I'm reminded of an early stripped down Beach Boys and perhaps the High Llamas but with a much greater depth of lyricism and a sometimes folksy country edge.
The beautiful warm melodies and gentle tempo's belie the power of some of the songs on this addictive album that despite the mellow feel has surprises in every song, often just in terms of the arrangements or slight change in the instrumentation but always ensuring there is plenty of variety in the slow moodiness. Often an album such as this can just seem repetitive in terms of the slow tempo but that is not a problem here, with those changes bringing a diversity in the depth of colouration.
The lyrical content contrasts beautifully with the gorgeous mellow soundscapes created by the melodies. There is a powerful poeticism wrapped up in those lyrics that often tell of an almost overwhelming sadness and a loneliness that enables the exploration of human emotions, often trying to work out why people make each other suffer. There is a plentiful use of metaphor but, unusually, that is not the complete basis for the lyrics. The metaphor is used more as a clue or a key to the lyrics of particular songs and they are not too difficult to interpret, rightly or wrongly! The accuracy of the interpretations doesn't really matter a whole lot, simply because the clues are there and will take you in the direction you need to go which may well follow that which Thomas intended but just as likely, loosely so. These reflections on life are by someone who sees perhaps many of the human faults and frailties but doesn't even claim to have the answers. More a question of accepting regrets and imperfections as simply part of the human condition and setting them in an unusual ambient atmosphere.
Whilst individual songs can be listened to in isolation this is very much an album for listening to from start to finish, creating a beautifully flowing collection that, if not exactly an emotional roller coaster, is at least one where the emotions are often encouraged to gently rise and fall perhaps echoing what most of us would like our lives to be rather than the dramatic intensity that is contained in the lyrics and probably more accurately describes the lives of most of us.
Just like Juan Ortiz starts with a vocal harmony duet, with piano and dobro working beautifully together on a quite stunning, reflective ballad. There is a piano, percussion and guitar accompanying the flowing vocals and harmonies on Monsters, another excellent song,  with an occasional chiming melodic guitar adding a little more colour on a song that is approaching mid tempo and can't really be placed in any known genre, although there is a vague folksiness in its makeup. La Belle Riviere is a real beauty of a song with its chiming melodic guitar accompanying a lovely accordion sound and a tremendous warm vocal performance from Thomas on a song that builds beautifully with mandolin and vocal harmonies lifting the tale to an almost 'high lonesome' rural feel. There is a restrained percussion, strummed guitars and piano with an occasional dobro accompany excellent lead and harmony vocals on The return (alternate) almost giving the composition a duet status. It is a gentle song but it does have its strengths in terms of melody and the excellent arrangement. The mandolin and dobro add some nice shades to The turn that time had taken, a mellow reflective ballad that rises and falls with the changes in instrumentation, with piano, guitar and bass, occasional flute and mandolin supporting the harmony vocals combining to give the song a quite epic feel.
To be honest my first impression as I listened to this album for the first time was that it is beautifully melodic and mellow, not always traits that attract me to a recording. Had I not played it again I would in all probability have looked back on it as 'pleasant,' if indeed I had looked back at all. In actual fact this is a tremendous album that has much to say both lyrically and musically. With repeated listening sessions it continues to repay with huge interest and I suspect will do so for a very long time to come. Buy the album, stick with it and you will get your rewards too!