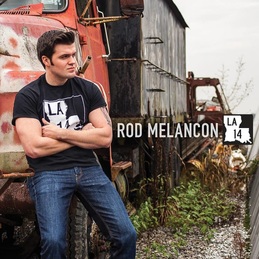 He hails from deep in swampy South Louisiana so it should be no surprise to anyone that Rod Melancon's music is steeped in a deep bluesy swampiness! What is a litttle surprising is the fact that he is also a classic 'country' singer from a mould not too far removed from the late great Johnny Cash. Prior to this excellent five song e.p Rod had released two full albums and in fact this e.p is a taste of what is to come on his third album, due for release later this year.
There may be just five songs on this e.p but no two are even similar. It is as if Rod is trying to give a brief idea of the variety he is capable of, something in which he certainly succeeds. He is a tremendous vocalist with a strong twang in his style and an expressive warmth that means he can sing just about anything and, as I've already said, he does!
The five songs are uniformly excellent and whilst I have yet to hear his first two albums, (a situation that will soon be rectified) thanks to the power and quite extraordinary quality of this e.p. waiting for his third album is going to be real trial of my patience! I need to mention some of the tracks to at least try to give the reader a taste of what you can expect but I'm genuinely struggling to pick out individual songs thanks to the tremendous quality of every aspect of every track, but do so I must. First though a mention of the styles that blend so perfectly and yet with various of those styles being to the fore on individual songs giving five entirely different atmospheres and generic leanings. There is always that swampy atmosphere, plus a little blues feel on occasions, a strong 'classic country' style and even on one song, the extraordinary Lights of Carencro, an intensely dark, psychedelic, almost heavy rock feel. The strongest themes lyrically are dark, even though the music styles are a mix of light and dark, one song even bringing light to the darkness of insanity and there is even a quite stunning, sad, pure country ballad in By her side.
Go on, it's just an e.p and if you buy the download of it on line it will cost you very little of your hard earned cash but will repay that investment a thousand fold. If you do so I pretty much guarantee that, like me, you will be drooling at the prospect of his next full album and also, like me again, will invest in his two previous recordings. This is an artist who has everything from his great vocals to his gifted songwriting and the ability to blend his stylistic influences into something that not only has the stamp of originality but is also pretty much unique.