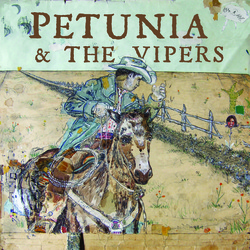 At times the broad diversity of this extraordinary album is quite breathtaking. Certainly it is an album that comes within the remit of ‘country music’ but veers from some amazing yodeling to raw edgy ‘hillbilly’ music, back to ‘traditional country,’ on to rockabilly, then to
incredibly eerie, almost sinister sounding ‘gothic country!’ There are even
occasional nods to ‘the rumba’ and samba! Whilst I’m always saying that there is very little true originality in any music, there are exceptions and this album is most definitely one of them. There are certainly echoes of other artists but when you take the vocals, varied tempos, instrumentation and perhaps even more importantly, the almost otherworldly atmosphere, into account there is not really anyone else that stands comparison. I’m totally unfamiliar with Petunias previous work but will now be checking out this albums predecessors when they
become available on line. It is an album that always keeps the listener slightly off balance. Just as you think you’ve got him pegged stylistically, he goes off in another direction but without ever making the album seem disjointed.
Petunia (R. Fortugno) handles all lead vocals, yodeling, trumpet, acoustic guitar, piano and charango and also wrote ten of the twelve songs. He is well supported by a tremendous group of musicians
that includes Stephen Nikleva on electric guitars, Jimmy Roy, Lapsteel guitar, Marc L’ Esparance on drums, percussion, tenor sax and backing/harmony vocals, Sam Shoichet, upright bass and last but not least the incredible singing saw playing on just one song of Doug
Tielli. Petunia is a native of Quebec although since he started life as a
travelling troubadour, wherever he happens to be at the time is his home. He is a total one off, with it being almost impossible to compare him to anyone else, although on a couple of songs there are similarities to Pokey Lafarge. His vocals are so distinctive that this is probably what helps bind the variety on this album together and easily avoids that disjointed feel that besets most albums that contain a diversity of styles.
The opening track, The Cricket Song, starts with the beautifully mellow sounds of a steel guitar and is joined by some of the most hauntingly extraordinary yodeling I’ve heard for a long time. Then in comes Petunia’s twangy appealingly country vocals and an evocation of a
country‘Canadian night’ is just about complete. There is more of Petunia’s
haunting yodeling before the conclusion of this almost otherworldly song that calls up the ghosts of Hank or even Jimmie Rodgers! You can be forgiven for thinking this sets the scene for a tremendously original pure country album but nothing is as it seems! The very next song is quite spooky but with its clanging construction almost evokes a Tom Waits hillbilly moment were it not for Petunias vocals, albeit very far from the preceding song! There is darkly edgy 1950s Rockabilly, with some tremendous guitar playing on Maybe Baby Amy, followed by what almost feels like a rumba beat on Bright Light, with vocals a little reminiscent of off centre artists such as Pokey Lafarge and with its quite diverse instrumentation adding a swampy New Orleans feel. The Hoagy Carmichael, Mitchell Parish penned Stardust sees Petunia giving this classic song his own stamp with a country crooner style supported by a lilting steel guitar. Certainly not reminiscent of Nat King Cole but giving the song a twist that Carmichael at least, would have appreciated! The Ballad of Handsome Ned clocks in at an epic seven minutes and forty six seconds but time just seems to fly by on this incredible song that is dark, haunting and beautifully conceived. Doug Tielli’s singing saw on Broken Down Love is just about the best I have ever heard, almost taking over as lead instrument on this slow moody ‘gothic country’ song. Still the style is not set because this is followed by a song that seems to flow between samba and bossa nova (certainly a central American feel anyway!) on Che (Guevara’s Diary), following which we are plunged back into Hank Williams mode on the gorgeous Irene Stanton/Wayne Walker penned ballad Forbidden Lovers, with its beautifully mellow steel guitar adding to the emotion.
It would be so easy to get even more carried away and write about every song but no writer could ever really describe this album
adequately. You really have to buy it for yourself and play it over and over again. I can’t even, hand on heart, say that I love every song (although I do most of them) but the album is worth its five star rating simply because of its diversity and originality that most would kill to possess! I’ve had it on constant rotation for a month or so and am still finding previously unheard nuances in this extraordinary recording. If only we could get him to England for some live shows, what nights they would be!